Cherries are harvested by hand, with workers returning to every tree every 8 to 10 days to allow for more selective picking. Cherries are hand-picked and floated before pulping, overnight fermentation, and then three rounds of washing/sorting, followed by 24 hours of soaking to remove any remaining muscilage. Drying takes place on raised beds over 14-21 days, using shade nets to cover during afternoons and covered by tarps in the evenings to protect against humidity.

Njemu Estate was founded in 1998 by Irene and Simon Nyaga. It’s a small affair, just over 3 hectares producing just over 100 bags a year. But while this is over three times the output from a decade ago, volume was never the goal at Njemu. Rather, legacy – the farm is named after the Nyaga’s two sons, Njeru and Muchiri, and intended as their inheritence.

And that’s because this was the land that Simon grew up on in the 1960’s, and inherented in the 80’s while putting himself (and his siblings) through university; Simon received a degree in Agricultral Economics and currently acts as the Estate’s agronomist. Irene, on the other hand, is in charge – let’s say of management; both of the farm’s staff, and it’s trees. Between the two of them they have what it takes to produce at the top end of what’s possible, from the already standards in place for coffees from Mt. Kenya.

Kenya is an enigma. It occupies a top spot in specialty – Kenyan top lots are always amongst the most expensive of any harvest. But yet it’s a country where coffee production is dropping year over year. Kenya is a place where traceability is given, but knowing what you want and how to get it are two different things. Rarely do we find partners more capable, and loyalties more difficult to navigate than we do in Kenya. For all the aforementioned reasons, competition in Kenya is fierce, making prized coffees feel like even more of a success.
However, no matter how formally the industry is structured, coffee still remains a system of people. And in a country where farmers own their own cherry production, there is additional power to connecting with coffee’s most important stakeholder. Farmers can, for example, point you to the best collections from every harvest, or delay sending their lots to auction to give you another week to sample. At request they can change the way they separate lots, bringing new products to market in a year that would take other countries nearly a decade to do.
But experimentation is not the name of the game. With washed coffees working so well, you won’t find many a manager willing to mess around with different fermentations, flotation, drying times or with certifications like organic.
The experiment instead is that of business model. How do cooperatives normalize earnings to keep their members engaged in coffee? How do we take away red tape to encourage more farmers to plant more coffee, as opposed to corn or dairy? How can small estates split off and succeed under their own pulping license? Is it better to sell through auction or directly to an international buyer – can you afford to cut out your marketing agent? Once you speak to these problems you are speaking the language of coffee in Kenya – this is a country that already knows how to coffee. 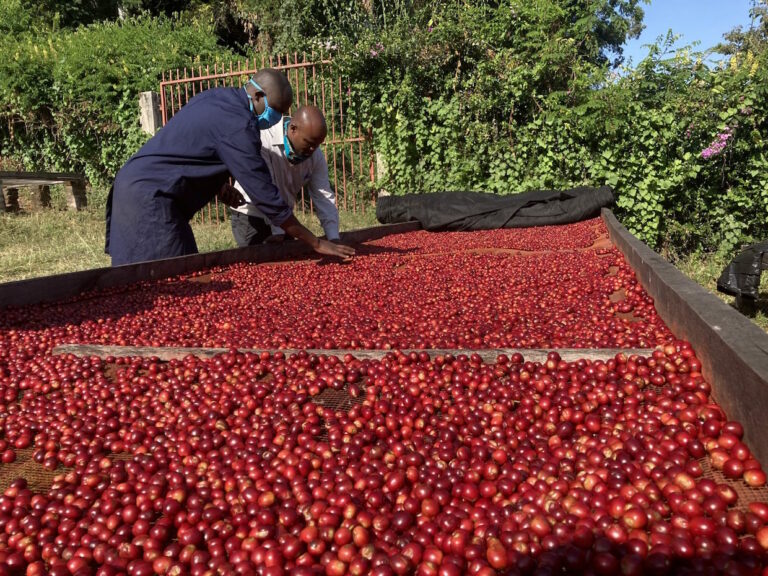